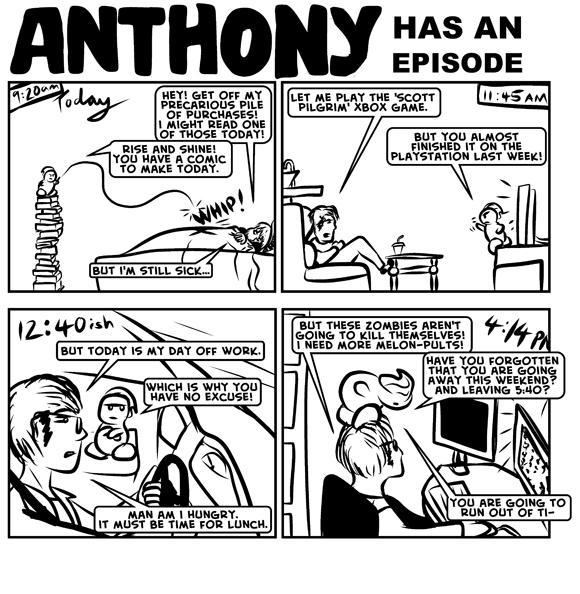 #7. Anthony Has Other Priorities 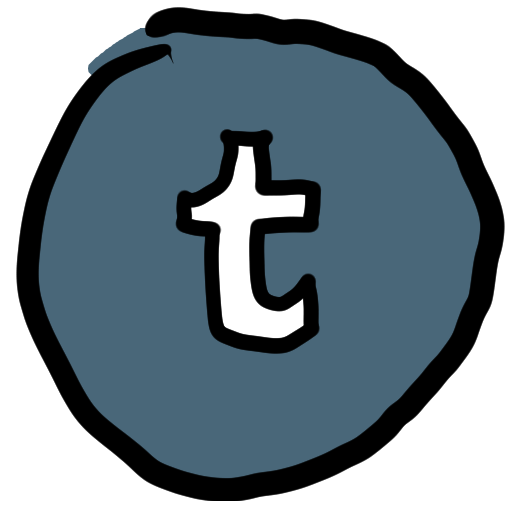 Panel 1: Anthony is laying in bed, Blombo (who shall be playing Anthony's innate sense of motivation) stands upon a stack of books striking Anthony with a whip.
Caption: 9:20am, Today.
Anthony: Hey! Get off my precarious pile of purchases! I might read one of those today!
Blombo: Rise and shine! You have a comic to make today.
Anthony: But I'm still sick...

Panel 2: Anthony is on the lounge in front of the television, resting his feet on the coffee table. Blombo blocks his view of the television, berating him.
Caption: 11:45am.
Anthony: Let me play the 'Scott Pilgrim' X-Box game.
Blombo: But you almost finished it on the Playstation last week!

Panel 3: Anthony is driving in the car. Blombo has his arms crossed in the passenger seat.
Caption: 12:40ish.
Anthony: But today is my day off work.
Blombo: Which is why you have no excuse!
Anthony: Man am I hungry. It must be time for lunch.

Panel 4: Anthony is sitting at his computer desk, Blombo is standing on his head.
Caption: 4:14pm.
Anthony: But these zombies aren't going to kill themselves! I need more Melon-pults!
Blombo: Have you forgotten that you are going away this weekend? And leaving 5:40? You are going to run out of ti ---

Transcriber's note: The incomplete word is 'Time'. Anthony had time to write this transcript but not add those final two letters in, although he did type the hyphen there so maybe he could have written "Run out of Tim" instead but I don't know if it is better to have more or less Tim.